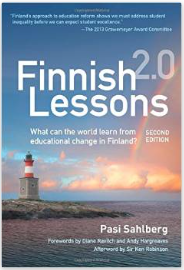 Jerry Becker sent me this.

By Kabir Chibber
Finland already has one of the best school education systems. It always ranks near the top in mathematics, reading, and science in the prestigious PISA rankings (the 2012 list, pdf) by the Organisation for Economic Co-operation and Development. Teachers in other countries flock to its schools to learn from a country that is routinely praised as just a really, really wonderful place to live.

But the country is not resting on its laurels. Finland is considering its most radical overhaul of basic education yet-abandoning teaching by subject for teaching by phenomenon. Traditional lessons such as English Literature and Physics are already being phased out among 16-year-olds in schools in Helsinki.
Instead, the Finns are teaching phenomena-such as the European Union, which encompasses learning languages, history, politics, and geography. No more of an hour of history followed by an hour of chemistry. The idea aims to eliminate one of the biggest gripes of students everywhere: "What is the point of learning this?" Now, each subject is anchored to the reason for learning it.

Pasi Silander, Helsinki's development manager, says the world has changed with the spread of technology and many of the old ways of teaching have no practical purpose. "Young people use quite advanced computers," he told the Independent. "In the past the banks had lots of  bank clerks totting up figures but now that has totally changed."

Many teachers in Finland, many of whom have been teaching single subjects their whole careers, oppose the changes. It is not hard to see why. The new system is much more collaborative, forcing teachers from different areas to come up with the curriculum together.  Marjo Kyllonen, Helsinki's education manager and the person responsible for reforming the system in the capital, calls this "co-teaching" and teachers who agree to it get a small bonus on top of their salaries.

Kyllonen told the Independent: "There are schools that are teaching in the old fashioned way which was of benefit in the beginnings of the 1900s-but the needs are not the same and we need something fit for the 21st century."
Later this month, she is proposing that the new system is rolled out across the whole country by 2020. Will the rest of the world follow the Finns' lead?