Unnatural Currents & WWCDAI (What we can do about it) Part 1

Turning word problems into meaningful, natural experiences is one way of describing what Dan Meyer was showing us at last night's (Aug 25) Math 2.0 Elluminate session. He's developing prototypes for curriculum units that he is beta testing with the help of lots of enthusiastic teachers who are willing to go the extra mile to do something similar. What Dan's cadre of early adopters (many of whom attended the session last night) are doing is testing the waters for a new kind of curriculum called WCYDWT (what can you do with this) which asks teachers to be creative designers of learning experiences for their students. For example, what would you do with the picture of a dog wearing a "triangular" bandana (figure 1)? Certainly NOT what the authors of this textbook example did. But the truth is as Dan pointed out in the session these kinds of contrived examples - unnatural currents, as he calls them – are difficult for students to own as real.

Classic math word problems tend to suffer from this contrivance affliction. For example, here's one (see figure 2) that Dan shared with us. From my experience this is a hard problem for most students.*  I still remember them from my own high school days and the only way I was able to do them was to follow the recipe that was in the book. And since I was pretty good at following recipes without making careless mistakes, I usually got A's. Was I good at math? Conventional wisdom said yes.  But the reality was that I was burying a deep, dark secret. I had no idea how to solve the problem without major scaffolding support. Without that net I would freeze and crash. And worse, I didn't really care, as long as I got good grades. Of course, that came back to haunt me in college when as a math major I could not hide behind my “Emperor's New (old?) Clothes." Luckily for me things turned out because (1) I discovered the 500 section of my college’s library and (2) later as a teacher, I became passionate about how best to teach math to kids. I taught Algebra I from a conventional textbook where these river problems did need to be crossed. I thought that if I demonstrated the logic of the steps in clear and concise language and if the kids understood each step that they would appreciate the power of math. Unfortunately, I forgot the lessons I learned from my own learning. Logic doesn't necessarily lead one to a profound understanding of math especially if the problem is perceived as boring. Dan's inspiration was to turn this contrived problem into a “real” one by substituting a moving escalator for the river.  The problem became how long does it take Dan to travel “up the down escalator.” (BTW – substitute staircase for escalator and you have the title of a cool education-themed book/movie from the 60’s.)
By solving the escalator problem (see Dan’s blog) he and his collaborators were doing a far more interesting albeit more challenging problem. The contrived version (figure 2) remains in the textbook still to be conquered or ignored as many of you might consider doing until you realize that not only might this problem be on one of those dreaded standardized tests but it's also a part of the way that Algebra works its magic and is very interesting to folks who like math. And if I want kids to appreciate math don’t we want them to be able to understand how the powerful ideas in Algebra makes solving problems so elegant?
Sidebar: It turns out the escalator problem may not be the best way to motivate the algebraic approach. (See Frank, Rob, Dan and Colin’s responses.)


I’ve started to think about a way to rescue our disparaged kayak problem and I think I made some progress. What I like to do is give my students a challenge (containing some perplexity** and fun) that’s in their zone of interest and skill level to pursue using manipulatives (virtual or physical) to help them concretize the formal language that will be used later when discussion about algebraic solutions comes up. (I like to think of formulas or rules as a shortcut way of solving the problem. But the caveat is they should only use formulas after they understand how and why they work. Part of mastery is being able to derive a formula when memory fails you.)
So I started looking for a manipulative to use with the Kayak problem. After a quick Google search I found a virtual manipulative*** written in Geogebra. I used the data I collected from this simulation and a spreadsheet to help me solve this in a way that I think would make sense to kids. 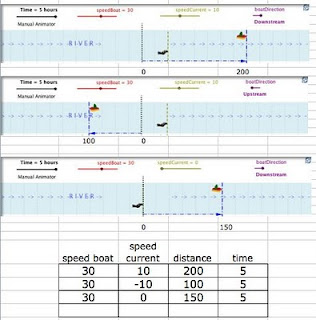 This is my initial collection of data. From my chart I see that that sum of the speed of the boat and the current is the same as the distance traveled divided by the time it took.


In the kayak problem since we know that distance = rate x time and distance = 12, and time upstream = 3 hours then the average speed of the kayak is 4 mph. Going down stream the kayak takes only 2 hours, so it's traveling 6 mph.

The only current stream speeds that are possible for the times to travel both up and down stream in the same time is either 5 or 1. Why? If stream speed is 5, then the kayaker could cover the distance downstream in 2 hours with a boat speed of 1 mph and vice versa – switch the 5 with the 1. The same works for upstream. This time subtracting the current speed  from the kayak speed has to equal 4. And 5 and 1 do that as well.
So in review, is this a contrived problem? Yes, indeed. Do we need better ways to teach it. Very definitely. The way to do it is for teachers to put on their creative caps and work with colleagues who can bring something to contribute to the WCYDWT curriculum party! And that’s what Dan is doing at his blog site right now.
Next time (Part 2): a powerful idea for connecting the abstract with the concrete. Inspired by Dan’s discussion of motivating students to move past counting rise and run from a graph with the more abstract short-cut:  y2-y1 / x2-x1
*My “most students” theory comes from my experience of teaching algebra word problems to freshman high schoolers. I didn’t say all because there were individual and classes of students that loved them and treated them like puzzles. As a student I personally wasn’t very fond of them because they weren’t the right kind of hard for me or in other words out of my zone, but I did them conscientiously so I could do well on the test. Sigh…
**Thanks, Dan, for the cool word.
***Online applet works best using Firefox (Mac users)
Posted by Ihor Charischak at 8:38 PM 4 comments: