Inspired by Seymour Papert's notion of a computer as an "object to think with" CLIME has over the past 24+ years supported math communities in the teaching and learning of math with the use of dynamic tools now in a Web 2.0 world. See Gary Stager’s

At the NCTM meeting in Washington, John Van de Walle led a meeting of educators who were interested in using Logo in the the teaching of mathematics. Approximately 125 people came to the meeting and the decision was made to create an organization of Logo-using math educators.

1987
The group was officially formed and was named the Council for Logo in Mathematics Education or CLIME for short. Ihor Charischak became the committee chairperson. The CLIME newsletter was born. Rheinhold Wappler becomes CLIME's first editor. CLIME begins holding annual meetings during the annual NCTM meeting.
1988
CLIME becomes affiliated with NCTM and is the only affiliate with a technology oriented theme.
1992
CLIME became concerned with the lack of visibility of technology at the annual meetings. A successful resolution was proposed to the delegate assembly of NCTM to create a technology advisory group to look into this matter. The upshot was a technology task force that revised the NCTM position statements on technology and calculators. This group met once again and after the papers were completed, never met again. No advisory group was ever formed. At least not as a result of CLIME's lobbying.

1994
Lew Romagnano becomes president of CLIME. CLIME changes its name to Council for Logo and Technology in Mathematics Education to reflect new sofware developments especially Geometer's Sketchpad. The name of the acronym however remains the same (L is not changed to T) in honor of the Logo movement and Seymour Papert that inspired so many of us.

1997
CLIME makes it to prime time! We are invited to host a session as part of the regular program in Minneapolis. The CLIME website is born with the help of the folks at the Math Forum. CLIME does one more name change: the Council for Technology in Mathematics Education. Though Logo is dropped from the name, its spirit lives on. It just means that Logo has a lot of good company on the software shelf these days. Clime "After Hours" Meeting & Tech Sessions - Minneapolis - 1997


1999
CLIME (after hours) meeting in San Francisco. Ihor becomes the first technology liason on the program committee.  Technology sessions in SF  CLIME reinvents itself and goes virtual at the NECC conference in Atlantic City!


2001
CLIME celebrates its 15th year in Orlando, Florida. CLIME agenda & technology sessions. It now has its own domain name - clime.org

2004
Annual meeting in Philadelphia. No CLIME meeting. Ihor is on the local arrangements committee for the conference. 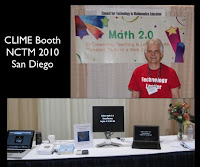