Another Rags to Riches Story

In a previous blog I lamented over the demise of the Broken Calculator. Well there is another program - Fraction Tracks (FT) - that appears to have disappeared as well for the same reason (unsupported plugins). Why does FT need resuscitation? If this simulated board game is used with care it can be a part of the solution to the number one challenge in elementary math education: learning fractions.  Before we discuss this NCTM FT "miracle" app, a little background may be useful.

If you search for a fraction app on the Web you will be amazed at how many there are. FT was/is a golden needle in that haystack. It encourages students to explore equivalent fractions in order to continue with their moves and win the game. From a teacher perspective it can improve their knowledge base and perspective on teaching fractions.* But, alas, the NCTM version which was developed with funding help from the now defunct Marcopolo project suffers from the "unsupported plugin" plague.

(Put the plague story on hold for a minute or so.) An effective way to introduce the game to students is to use a different modality: a board game version of FT that doesn’t require a computer. Here’s a description of one version of the game.

The Fraction Tracks Game, used in fifth-grade classes at Tollgate Elementary School of Expeditionary Learning in Colorado, provides opportunities for students to use equivalent fractions, break fractions apart into unit fractions, and mentally add and subtract fractions with denominators 2, 3, 4, 5, 6, 8, or 10 as they try to move their game pieces from 0 to 1 along tracks labeled in various fractional divisions. Included here are the game boards, rules for a basic game play, and “extension” rules that provide more advanced practice.

Another way to introduce the game (and eventually the app) is to play it cooperatively. 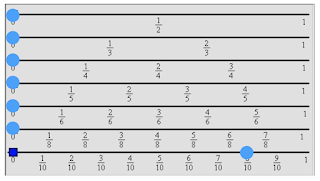 Start the game by placing one chip on each track, at the beginning (0) of each track.
A student then chooses a card from a deck of fractions. The fraction on the card is the total move a player must make using one or more chips.
The first fraction chosen in this game (see figure on left) was 8/10. On the board the bottom chip is moved to 8/10.
The play can move on one track or on several tracks, but the total must equal the fraction on the card. What if the next card is 4/10? The student may be stumped as to what to do unless he realizes that 4/10 is equivalent to 2/5. Thusly, the fifth's chip can be moved to 2/5 or the student can realize that 2/5 = 2/10 + 1/5 and thus score a point on the 10th's line as well as move the 5th's chip to 1/5. (See figure below.) The ultimate object is to get all 7 chips to wind up on the 1. (Here's more on strategies for making moves.) 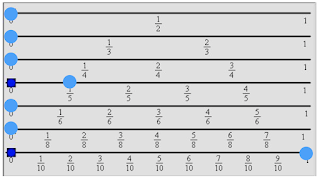 If a play cannot be made, the game is over. The team score is the number of chips that made it to 1.
Highlight: Watch this video** of one teacher’s way of teaching FT to her students.
The app version has been resurrected (written in Flash) and is now available here. It is a two player game and has a timer. Have fun!

* https://dmcpress.org/cm/fraction_track/Impact_fraction_tracks.pdf
** The video is 16+ minutes but well worth it! Watch it soon because it too might disappear. (A different kind of plague: lack of support.) 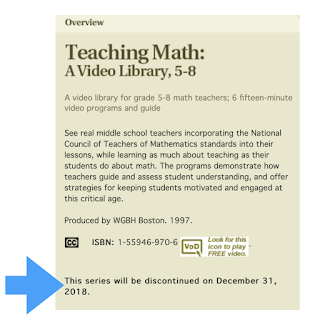