Retweet "NCTM thoughts aka We don't even exist!"

We still have a long to go to educate math teachers that there is this world of incredible math bloggers out there in the cloud.

Challenges are daunting, but doable if we all work together! - Sylvia Martinez
I had a fun time talking about the trials, tribulations and hopes for the future of math education with Sylvia Martinez last night. You can listen to the recorded discussion here.

Here are some relevant discussion points and links:

Cracking the Code of Electronic Games: Some Lessons for Educators
http://www.tcrecord.org/content.asp?contentid=15917
Background/Context: Students’ ready engagement in electronic games and the relative ease with which they sometimes learn complex rules have intrigued some educators and learning researchers. There has been growing interest in studying electronic gaming with the aim of trying to work out how learning principles that are evident in games can be harnessed to make everyday academic learning more engaging and productive. Many studies of students’ learning while gaming have yielded recommendations for teaching and learning in regular classrooms.
We didn't get a chance to talk about this study. But it's a very promising area of research that could yield some tipping points for math education. 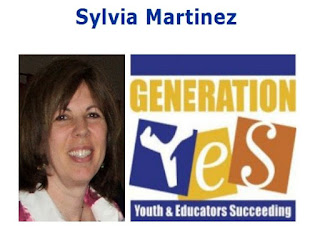 Join Ihor and the Math 2.0 group as they discuss the future of Math Education with Sylvia Martinez who is a veteran of interactive entertainment and educational software industries, with over a decade of design and publishing experience.
Prior to joining Generation YES, Sylvia oversaw product development, design and programming as Vice President of Development for Encore Software, a publisher of game and educational software on PC, Internet and console platforms. Sylvia was also involved in the company's Internet initiatives, including Math.com, the award-winning web site that provides math help to students worldwide.
For seven previous years, Sylvia was an executive producer at Davidson & Associates/Knowledge Adventure, a leading educational software developer. She designed, developed and launched dozens of software titles including Math Blaster: Algebra, Math Blaster: Geometry and Maurice Ashley Teaches Chess. In addition, she was responsible for Educast - the first Internet service for teachers that provided teachers with free news, information and classroom resources. Prior to joining Davidson & Associates, Martinez spent six years at Magnavox Research Labs, where she developed high-frequency receiver systems and navigation software for GPS satellites.
Sylvia has been a featured speaker at national education technology conferences in areas ranging from the use of the Internet in schools, Web 2.0 technologies, student leadership, digital citizenship, project-based and inquiry-based learning with technology and gender issues in science, math, engineering and technology (STEM) education.
She holds a Master's in Educational Technology from Pepperdine University, and a bachelor's degree in electrical engineering from the University of California, Los Angeles. More details>
Posted by Ihor Charischak at 7:21 PM No comments: