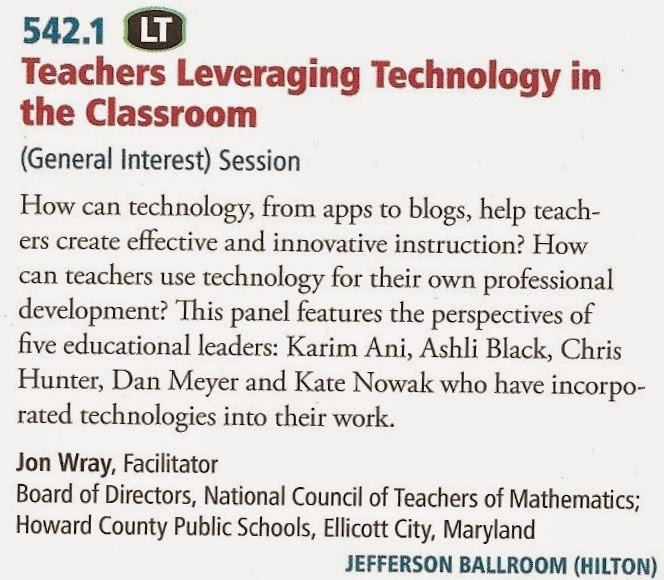 Do you think this conversation is happening in Finland,  that the Finnish Council of Teachers of Math is having sessions about leveraging technology in the classroom?

At the NCTM conference last week I attended a panel discussion and was struck by Karim's comment. He continued with "sometimes I'm a bit of Luddite because often times we use technology as a thing to pursue in lieu of the thing that we actually want to pursue." [That thing being children learning math.] It reminded me of what Seymour Papert wrote back in 1990.


"Well, how many more [conferences on computers in education] should we have? Isn’t it time for us to grow up? And as we grow up, we should stop seeing ourselves as specialists of computers in education, because that casts us in the role of a kind of service profession. Accepting the role allows that other people are the ones to decide the big goals of education, what the curriculum is, how learning happens, what’s a school. And at our conferences we talk about how their decisions can be served by the computers. Well, fine, up to a point. This certainly allows revolutionary actions as long as we are at the stage of crafting Trojan horses to throw into the system. But at some point we have a responsibility to break out of that marginal role and take on our true vocation, which is not one of service but one of leadership. At some point it will be as ridiculous to have a world conference in computers and education as to have a world conference on pencils and education." Perestroika and Epistemological Politics, Seymour, Papert - Sydney, Australia – July 1990

Has Finland turned the corner and "grown up" focusing on learning and teaching? Just like Karim I'm not sure. But it's clear that we as a nation have not achieved that kind fluency with technology that these young panelists exemplify.

Technology can be a distraction. Because unlike a pencil which can be mastered in minutes, technology takes a bit longer and it's easy to get lost in its intracacies and one can lose sight of the prize we are after. But all the panelists on Leveraging Technology in the Classroom embraced technology as a strategy for winning the hearts and minds of children and teachers in our classrooms.

I think at this session there was an attempt to focus on the prize (students learning math). There weren’t any debates about which software was better (e.g. Sketchpad vs. Geogebra.) Though there was consensus that the Desmos calculator was a productive tool in helping children interact with mathematics in a genuine way.

Each panelist contributed something essential in this endeavor to transcend leveraging technology from a “thing” to a support system for the pedagogical idea that teachers value.

Ashli Black reminded us that teachers interacting face to face is still the ideal mode of the learning process. This NCTM conference provided that for educators. So do regional and local conferences. Maybe we need more conferences she suggested.

Conferences are great, but they are expensive said Karim. He’s right. Unlike 1990 when Papert wrote his article pre-Web 2.0 the online platform for collaboration was not available especially via blogs. It’s still not common mode for communication for most teachers, but it is growing steadily.

What’s NCTM’s role in this? Jon Wray said NCTM's mission simply put is to promote successful teaching and learning of math. One concern is that the average age of an NCTM member is 57.5 years. This has to change. I spoke up at the session and encouraged younger participation in NCTM. But NCTM also has to encourage younger teachers to get involved. The NCTM journals need to become more Web-based and interactive to appeal to a younger audience. Also to encourage math blogging and highlight math bloggers in their e-blast publications which tend to focus on what the President is saying rather than what the young teachers are doing. (Their Illuminations effort is more aligned with this, but needs to be better promoted.)

Blogging clearly needs to be promoted. Kate Nowak shared three components of blogging: (1) it has to be sustained over time (2) directy linked to classroom activity and (3) interaction with colleagues is crucial. Don’t do it alone.

The panel was asked what tools they found useful. The response was the technologies that promote communication, discussions and debates.

Raymond Johnson offered that building simulations that helped textbook problems come to life is important. He mentioned Simcalc and the Freudenthal institute as two groups that are making this kind of software available at a minimal cost.

Technology is not yet seamless in schools, but this panel made me more optimistic that blogging will be a powerful tool in encouraging more powerful conversations for students and teachers. That bodes well for the future.

Jon Wray - panel moderator
Posted by Ihor Charischak at 9:32 AM