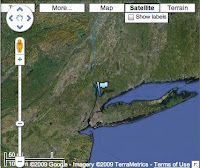 I guess you can call this a Web 2.0 approach to signing a petition. So please take a few minutes and let me and the CLIME world know that technology is indeed worthy of its principle status and should be championed as such. NCTM Conference 09 Update The NCTM 09 Washington Conference sessions have been posted. I’ll take a closer look at the technology sessions in my next blog.
Posted by Ihor at 5:45 PM